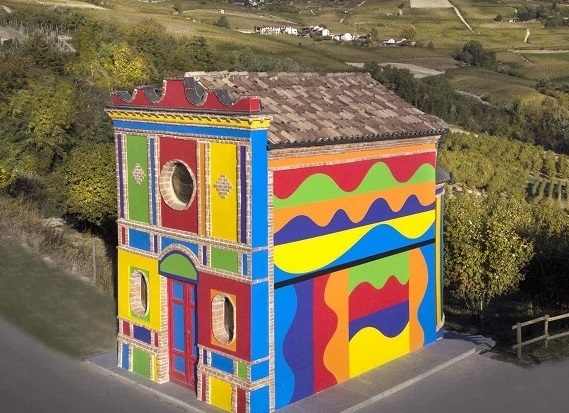 LA MORRA The Chapel of Barolo by Sol LeWitt and David Tremlett, one of the first and most recognizable projects for the recovery and enhancement of the environmental context of the Langhe with interventions of contemporary international art, is twenty years old.
Built in 1914 as a shelter from storms and hailstorms for those who worked in the surrounding vineyards and never consecrated, the Chapel of SS. Madonna delle Grazie was purchased by the Ceretto family in 1970 together with 6 hectares of the prestigious Brunate vineyard, in the heart of the Barolo DOCG.
Reduced to ruins after years of neglect, it has become one of the most famous buildings in the area, the Chapel of Barolo, thanks to the Ceretto family who in 1999 entrusted a reinterpretation in a modernist key to the genius of the artists Sol LeWitt and David Tremlett.
The Chapel of Barolo by Sol LeWitt and David Tremlett celebrates its twentieth anniversary
The creative spark suddenly arose in front of a glass of Barolo and the majesty of the landscape. The artists immediately liked the idea of recovering the ruined building in a spontaneous division of the interventions: on the outside, geometric forms in acidic and strong colours designed by the American master of conceptual art, Sol LeWitt; on the inside, large backgrounds in soft colours, stretched out with the palm of his hand by the Englishman David Tremlett, also the author of the water reflections of the marble floor.
To celebrate the anniversary, many events are scheduled in the autumn, including a Walk organized with Torino Spiritualità and dedicated to the colors of the Chapel with a lecture by Riccardo Falcinelli (Saturday, September 14 - Dit e-mailadres wordt beveiligd tegen spambots. JavaScript dient ingeschakeld te zijn om het te bekijken.) and the exhibition "Keeping Time" imagined by the Ceretto family with the heirs of the two artists and curated by Guy Robertson (director Maheler - LeWitt Studios) and Tony Tremlett, son of David Tremlett (opening Saturday, September 21 - Dit e-mailadres wordt beveiligd tegen spambots. JavaScript dient ingeschakeld te zijn om het te bekijken.). For the first time, the setting of the Brunate vineyards will host an art exhibition that will be set up in the spaces of the former Ceretto distillery around the Cappella del Barolo. The anniversary is also an opportunity to tell the story thanks to a book, published by Corraini, which collects unpublished documents and retraces the history and evolution of the project that led to the happy link between the Langhe and art.
Ceretto and art
World-famous architects, artists and designers are periodically involved in a variety of projects, including the renovation of the Cappella del Barolo (1999) by Sol LeWitt and David Tremlett, the Cubo in Castiglione Falletto, a transparent structure overlooking the vineyards of the Docg del Barolo and the spectacular Acino at the Monsordo Bernardina estate, a platform suspended over the slope that gives the observer the sensation of floating above the hills; not to forget the charm of La casa dell'artista (2010), among the rows of vines of the Monsordo Bernardina estate, a loft built from the recovery of an old farmhouse, which has hosted artists such as Kiki Smith, James Brown, Francesco Clemente, Miquel Barcelò and Gary Hume, and inside which there is a canopy bed created by the artist Anselm Kiefer, and also the gate sculpture designed by the artist Valerio Berruti to protect the vineyard of Bricco Rocche in Castiglione Falletto or the works of Kiki Smith and Francesco Clemente housed in the two family restaurants La Piola and Piazza Duomo, home of the tristellated cook Enrico Crippa.
Many contemporary art exhibitions have been organized thanks to loans from collectors, institutions or artists and organized by the Ceretto family. The exhibitions, all curated by Bill Katz, have been: "10 Artists for Steven", an exhibition in honor of the American architect Steven Shailer with works by Simrel Achenbach, Donald Baecheler, James Brown, Francesco Clemente, Lynn Davis, Renate Graf, Juan Hamilton, Robert Indiana, Marina Karella, Anselm Kiefer, Tom Levine, Andrew Lord, Thomas Nozkowski, Kiki Smith, Philip Taaffe, Terry Winters and Zachary Wollard (2010); "Americans", a group show with works by Jasper Johns, Julian Lethbridge, Ed Ruscha, Kiki Smith and Terry Winters (2012); "Rivers" with works by Ellsworth Kelly (2013); "Der Rhein" (The Rhine), exhibition of eight large canvases entitled by Anselm Kiefer (2014); "Mary Magdalene", three large sculptures by Kiki Smith (2015); "After Omeros", solo exhibition by Francesco Clemente (2016); "Holding the Milk", video installation by Marina Abramović (2017); "Lynn Davis & Patti Smith. Conspiracy of Word and Image" with the presence of Lynn Davis and Patti Smith (2018).